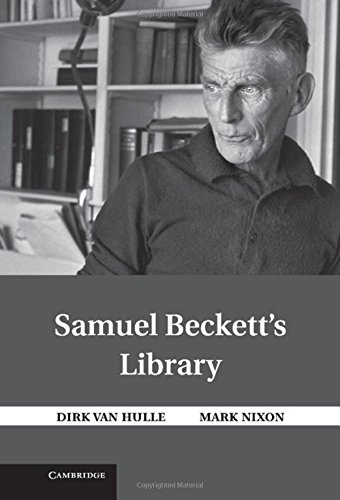 By Dirk Van Hulle and Mark Nixon, Cambridge University Press. Fully examines Beckett’s reading practice, and the way he used his reading in his writing.

Samuel Beckett’s actual library “is still where it was at the time of his death in 1989, in his apartment on the Boulevard St. Jacques in Paris. Only a relatively small amount of books had previously been taken out of the library…The library contains roughly 700 books, which includes those volumes that Beckett kept at his country retreat in Ussy that were moved to Paris when he died.” From books Introduction, pages xiii-xvii.

Reading this book came to a new understanding of Beckett’s Process for Foraging and Storaging.

And how much unknowingly I was there — all along.

Talks about Beckett as an artist who is a reader, a phrase hunter, an extractor, notebook keeper, writer in margins — yes a marginalist!

Especially his Florentia edition of Dante.

Beckett himself having referred to it as “treasure … with notes that knew their place…” As well as: a “horrid [thing], beslubbered with grotesque notes, looking like a bank book in white cardboard and pale gold title …”